For a midweek game I wanted a break from getting the AWI demo game ready and  I wanted something easy to set up and play.

I chose what is really a boardgame “Cowboys – The way of the Gun”. I have the old version and I believe they are about to or have given it a new facelift. While I like the game I do like figures as well so we have attempted to play the game with 3D build and figures. This has never really been too successful and that is mainly due to the move/action or shoot approach in the game. It does not allow you to move and shoot and as we all know the films are full of individuals running across streets and alleys blazing away.

The aim of the game night was to develop a simple set of modified rules to support the table top version.

In the original game most players have 4 wounds/Strength Points(SP) as these are reduced so does the movement but it never really affects your firing. We decided that what ever your strength was is the number of actions you can activate.

1 action would allow you to walk 2″or run 3″or aim or fire or reload (max 3 bullets) or climb half a flight of stairs or play an action card that involved carrying out an action (Setting fire to a building, recruit some town folk).

This could allow a healthy player to walk 4″ aim(+1) and fire.

We wanted to change this from a “you go I go” approach to a random-ish approach. At the start of the turn each main faction rolls a D6 and adds the SP of their characters and 1 for each additional town folk in their posse. Highest can go first or pass.

In the board game range is in squares so we just doubled the ranges. This gives a rifle a 40″ range which could cover a town from a good vantage point.

The game allows you to recruit townsfolk. We decided that you can only recruit townsfolk that are within 6″ of your character and are not closer to enemy. You can only pick a figure on the table and it is armed with what it has if a cowboy but if a civilian it has a pistol and has a -1 skill rating rather than the standard zero in the game.

As well as the modifiers in the game we added the following:

The game played really well although I am certain we will treat the rules as a work in progress.

I played the sheriff and lost all three games but what fun. At one point Nathan had recruited 3 civilians to aid him and I felt like the guy in Pale Rider “dancing” before being shot. It was only when packing away we realised that we had forgot to take any photos, so I grabbed a few. We will probably play this again on our next all day gaming day where I hope to get a better action report including photos. 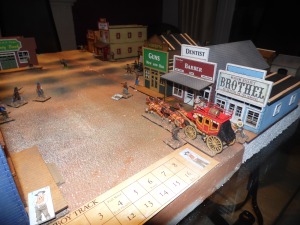 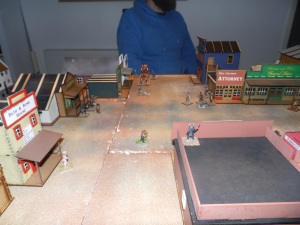 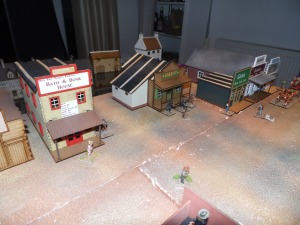 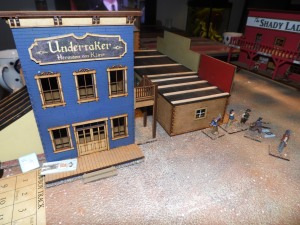 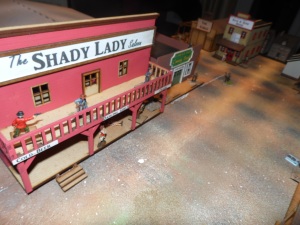