Sam ” Dirty” Daily woke as the train jarred to a halt in the Plymter Town station.  It was the first time he had returned since he shot his mining partner Jack ” Scruffy” Tarr who had claimed he had been cheated out of his share of panning rights following a dodgy  poker game. Only in the last two weeks had Sam’s hair grown long enough to cover the missing part of his ear that Jack had shot off when he was called out. Sam was a much better person with a gun than Jack and had responded by gut shooting Jack, who had crawled off to die. Sam is in town to pay into the bank his share of the gold ( 5 bags) from the claim. Sam has found a new willing partner to do the work as it is hard work and Sam longs for an easy life. The only issue today could be the Sheriff, who may want to chat about the fight. If he could be avoided then it might allow the day to go easier.

Jack “Scruffy” Tarr leaves the General store with a late breakfast of beef jerk. His ribs are still hurting from the beating he received yesterday from a thug at Madam Nellie’s Whorehouse where he had been recovering, hiding in a room occupied by Zo Wong. She had been found Jack  shot and taking pity on a soul in far more distress than herself helped him back to her room where she had cared for him, forcing him to hid in the cupboard when plying her trade. Jack was discovered yesterday and “convinced” by Dan to pay the equivalent (6 bags of gold) for Zo Wong’s time. The bill is due to be paid by  12 noon today and Dan, a thug is due to collect.

While biting down on a rather tough bit of jerk on his way back to the whorehouse to ask for more time he spots out of the corner of his eye  Sam  on the train pulling into the station.  Time for revenge  he thinks as the Town clock strikes 12.

Dan(The Thug) – yesterday  discovered someone in Zo Wong’s room. After a discussion the “guest” agreed to pay for her time and the payment is due to pay at 12 noon today. With only a few minutes to go he has not returned so Dan sets out to find him, get the money and make his boss Madam Nellie happy. During yesterday’s discussion Zo objected and Nellie asked Dan to take her to Mr Moo’s meat shop for a rest and lie down with the pigs!  Getting the money will help fund a new girl, maybe one that would like a simple country boy who locals say is “strong in the arm thick in the head”.

Sheriff Dupree Dawg steps out of the office with not a care in the world. this is the easiest town he has ever worked in. The inhabitants are generally law abiding although  one, a Sam Daily did cause an issue a few weeks back having shot his ex partner. Luckily no body was found so a chat is on the books should he ever show his face in town again.

This was the scene for our Saturday game. 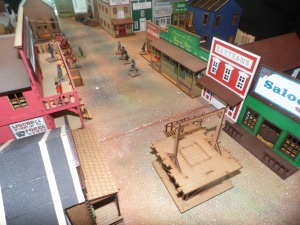 View down the main street at 12 noon

Sam played by Steve leaves the station and decides to talk the back lanes  towards the bank.

Jack played by Laurie continues to walk away from the general store towards the Whorehouse.

Sheriff played by me. Surveys his empire from the porch outside the jail.

Random event – next player drawn gets a sudden headache reminding him he needs to pick up his glasses. Until they get them they are -1 on shooting and fighting.

Dan gets a headache and heads off to the optician to collect his glasses, walking past Jack.

Jack  decides to hang around but does recruit a gunman who happened to he having a rest on the roof of the bunkhouse.

Sam spots Jack and darts into a local shop and sneaks up to the window.

Sheriff starts to walk down the main street where there are a few locals enjoying a drink.

Jacks recruit covering the main street and the sheriff

Sam takes a shoot through the shop window and hits Jack for a wound.

Sheriff starts to run down the street shouting a warning

Jack returns fire at Sam but with no effect.

Dan still making his way to the opticians

Sheriff get to the scene and shouts a warning, no response so tries to shoot Jack ( maybe in the back) but manages to hit Jack for a wound and a member of the public killing him.

Jack turns and shoots at the sheriff hitting him twice. Jack triggers his local help on the roof who also hits the sheriff.

Dan gets to the opticians

Sam leaves the shop and heads back into the alleys 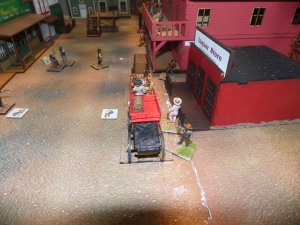 Marshall getting out of stagecoach. Sheriff at the back sheltering. two dead body counters can be seen in the street (must buy some casualties).

Sheriff plays a health card and runs for the cover of the stage coach that has arrived outside the Shady lady Saloon but not before he recruits a local to help him in the gunfight.

Jack shoots the local up but fails to hit the sheriff, the main street now has two dead bodies on it both locals. Jack’s recruit fires on the sheriff but misses.

Dan leaves the opticians and is almost instantly approached and offered  some gold to get their brother out of Jail. Having seen the deputies leave Dan accepts and heads for the jail.

Sam makes it to the top of the town.

Deputies leave the jail to investigate the noise

Random event – long hair is getting in their eyes so -1 on any shooting and fighting until they get it cut at the barbers.

Sam gets hair in his eyes but is not too concerned.

Dan walks in the jail and soon open the cage freeing the inmate and getting 2 bags of gold.

Sheriff blasts away at the Jack’s local recruit  on the roof but his shotgun is not the best and misses.

Stagecoach pulls up near the Shady Lady Saloon. Two men can be seen having an argument on the balcony

Deputies are distracted by the sound of shooting coming from the Shady Lady as two brothers argue over one of the women.

A marshal jumps out the stagecoach in his combination underwear and heads for the Shady Lady weapon drawn (I do mean his gun).

Jack moves up the main street but due to wounds he cannot move too fast his recruit fires at the marshal with no effect.

Sam Darts out of the alleys and heads for the bank which is having a new safe delivered.

Dan legs it from the fire

Sheriff Reloads and takes a few more shots at Jack’s recruit again to no avail.

Jack and recruit take a few wild shots at the sheriff and Sam, both missing.

Jack makes it to the bank but before entering recuits a local to stand watch outside and then he finally manages to deposit his gold and claim the day as his  victory. 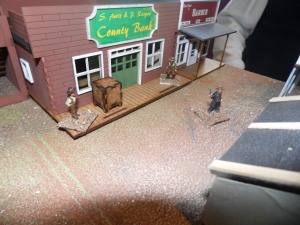 Sam in the bank with local recruit outside in case anyone take an interest.

Everyone had a great days gaming and all agreed that the modification /house rules worked.